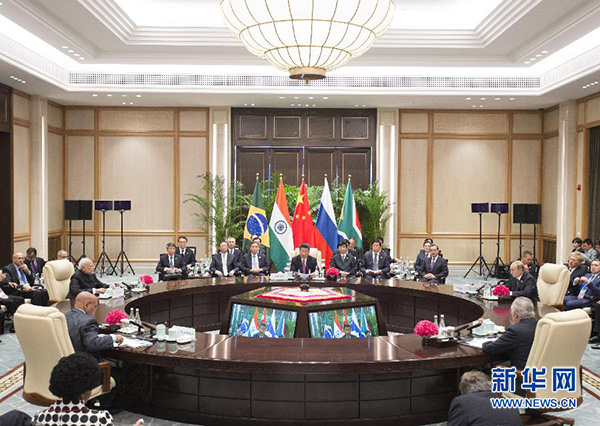 Since the beginning of this year, cooperation among BRICS countries — Brazil, Russia, India, China and South Africa — has maintained sound momentum with an expanded scope and more outcomes, Xi said while attending a BRICS leaders’ meeting on the sidelines of a G20 summit in Hangzhou.

BRICS nations are leaders among emerging-market economies and developing countries, and also important members of the G20, Xi said, noting that they should reinforce coordination to build, maintain and develop the BRICS and G20 platforms.

At the meeting, BRICS leaders exchanged views on a wide range of important global areas of common concern, including political, security, economic and global governance sectors.

Despite challenges in their respective economies, BRICS members recognized that they are still critical engines for global economic growth due to positive growth momentum and prospects, according to a statement issued after the meeting.

They also expressed concern about rising protectionism, against a backdrop of declining global trade, vowing to join efforts to facilitate market links and build an inclusive, rule-based and open world economy.

They also said that IMF quotas fail to reflect current global economic realities, urging G20 members to step up efforts with the IMF to increase quota resources and review the distribution of quotas and votes to ensure a fair reflection of emerging and developing economies.

They called for the completion of 15th general review of quotas and the creation of a new quota formula before the 2017 IMF annual meeting, the statement said.