Independent truckers on strike will receive a heavy fine if they obstruct and block the country’s main highways the Ministry of Justice announced on Tuesday. According to Justice Minister José Eduardo Cardozo this is a political movement and not a social movement for rights. 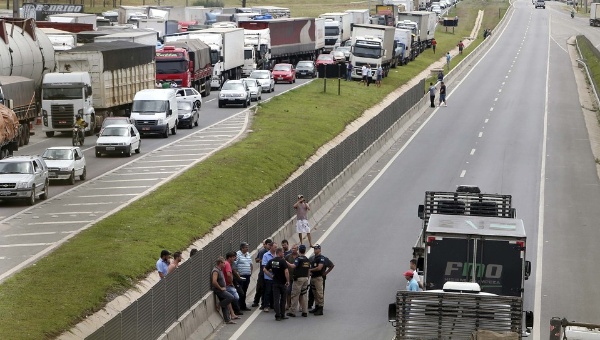 “We will not admit that a political movement, without any demands for truckers, will bring losses to the Brazilian society,” said Cardozo. The fine, originally set at R$1,915 was increased to R$ 5,746 for those blocking highways. Movement organizers may be fined R$19,000. According to Cardozo between Monday and Tuesday approximately 100 fines were handed out.

The strike, which started on Monday with truckers disrupting traffic in eleven states but dwindled to eight on Tuesday was also discussed by Brazil’s President, Dilma Rousseff. During her visit to Rio de Janeiro to visit a metro construction site and deliver houses from the Mibha Casa, Minha Vida (My House, My Life) program, Rousseff said that everyone is entitled to fight for their rights, but there is a limit.

“To block roads, compromising the economy and hindering the transport of food or fuel…that (action) can be considered a crime,” she said. “We will try to stop any loss to the economy. This will not be permitted. To obstruct is a crime. To affect the economy is a crime,” added the President.

Anti-government movements were quick to respond to the government’s measures and the President’s words. “The MST (Landless Workers Movement) can block roads, put fire to tires, threaten with knives, and that ok,” ironically stated the group Vem Pra Rua (Come Out to the Streets) post on social media, “That is all within the democratic and republican spirit of the PT (Workers’ Party)”.

“The fines for the MST do not exist. This government is extremely coward, hypocritical and anti-democratic,” stated Movimento Brasil Livre (Free Brazil Movement) on its Facebook page. “They have no concern with the obstruction of highways or the economy, only with the chance of losing their power.”