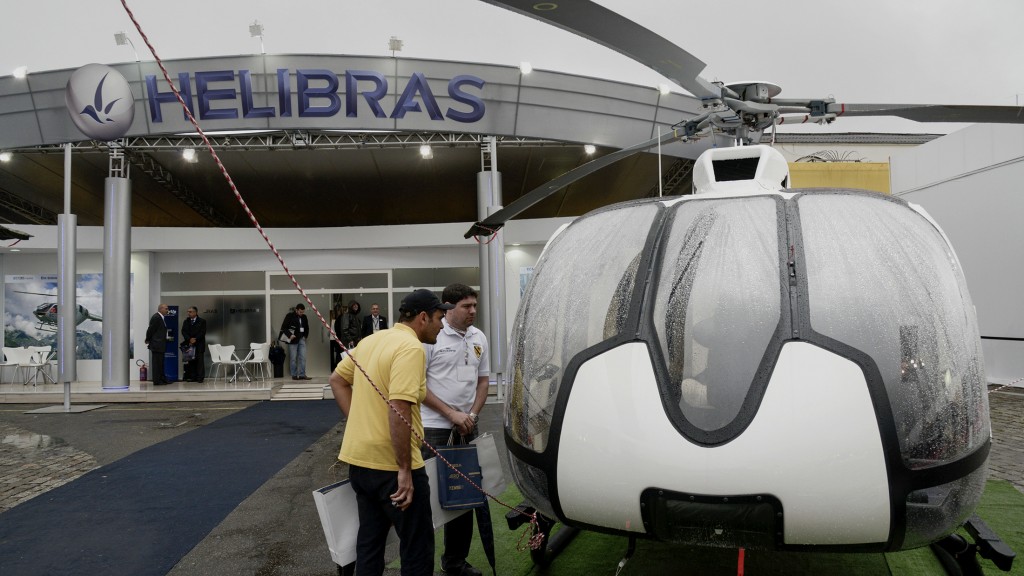 Chalk up another casualty of Brazil’s economic crisis: the world’s busiest helicopter market.

Flights are down by a third in Sao Paulo, where rooftop helipads dot business and residential districts. For the first time in three decades, Brazil’s fleet is poised for an annual decline. And flight schools are full of trainees who may never find a job in a commercial cockpit.

Rotorcraft travel is being cast aside as Brazil slides into a recession projected to be the nation’s deepest since the 1930s. For helicopter companies, the pullback follows a five-year surge driven by by offshore oil exploration and demand from millionaires to soar above Sao Paulo traffic and street crime.

“Nobody is spending money,” said Rafael Dylis, the sales manager for Sao Paulo charter provider Helimarte Taxi Aereo. “Everybody who needs to save money, saves on our service. They prefer to go by car, by bus, by other transportation, but not helicopters.”

Helicopters are fixtures as air taxis in Sao Paulo and Rio de Janeiro, whose combined fleet of almost 360 outnumbers the 215 registered in all of New York state, according to U.S. consultant JetNet LLC.

But the pulsing roar of helicopter blades and the whine of turbine engines over Sao Paulo high-rises are being heard less often these days. Helimarte has seen business plummet 40 percent to 300 flight hours a month as Brazilians eschew their former luxuries, Dylis said.

“Until this year, we had the biggest civilian fleet in the world in Sao Paulo,” said Ruy Flemming, a director at the Brazilian helicopter pilots association.

Brazil’s mix of Atlantic Ocean crude reserves and sprawling, gridlocked metropolises helped create an unusual dependence on helicopters: They account for about 14 percent of the civilian aircraft fleet, almost three times as much as in the U.S., according to statistics from the helicopter pilots association and the U.S. Federal Aviation Administration. Brazil’s fleet grew 50 percent through July since 2010, according to JetNet.

Wealthy Sao Paulo residents bound for beachfront homes often choose to fly, shielding them from the risk of kidnapping. For senior executives, helicopters have been a transport mode of choice between Sao Paulo’s business districts and Guarulhos International Airport.

Helimarte’s 12-minute trips to Guarulhos erase the hassle of a journey that can run 90 minutes or more by car. But they aren’t cheap: Chartering a small Robinson 44 for as many as three passengers costs 3,000 reais ($830). Upgrading to a plush, six-seat, turbine-powered Agusta 109 runs 12,000 reais.

While autos and motorcycles still choke Sao Paulo’s freeways, high-end spending on helicopters is dwindling as the economy contracts and consumer confidence sinks.

“People are putting the brakes on,” said Fatima Busani, one of the owners of Sao Paulo helicopter operator Andancas. Squeezed by rising fuel prices, Andancas recently raised prices 36 percent to 1,350 reais for half-hour aerial tours, only to see demand wilt.

As with other Brazilian industries, glimmers of hope for a helicopter turnaround are few and far between. The pilots association predicts the number of Brazil-registered helicopters will fall in 2016, the first such drop since the mid-1980s.

Flemming, the association official, said trainees lured by the once-hot market are finding that certification as commercial pilots — after spending 100,000 reais to train for a license — is no guarantee of employment. Flight-school enrollment ballooned seven-fold since 2010 to about 800 last year. At least 500 more new pilots will graduate in 2015.

“Most of these guys will never professionally fly a helicopter,” said Flemming, 55, a former lieutenant colonel in Brazil’s air force. While he flies for a wealthy family whose trips still include visits to a seaside vacation home, his helicopter-pilot son isn’t so lucky. Caio Flemming, 23, has 1,500 flight hours — 15 times more than the minimum for a commercial license — and can’t get a job.

At Helimarte, Dylis struggles to find customers while having to pass on rising costs for fuel amid the weakening of Brazil’s real, the worst-performing major currency against the U.S. dollar in 2015. In almost six years at the company, he’s never seen so little interest in helicopter travel.

“We had a better time in May and June, but July and August weren’t good,” Dylis said. “We don’t know what to expect.”