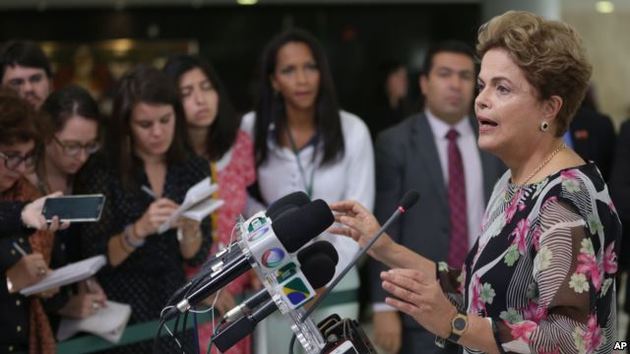 Brazil’s Congress early on Wednesday upheld key presidential vetoes to avert a surge in public expenditure and postponed a decision on a possible salary increase for judiciary employees, in a rare victory for an embattled government struggling to rebalance its fiscal accounts.

Lawmakers decided to uphold President Dilma Rousseff’s veto of a bill to remove social security taxes on diesel fuel purchases. The bill would have cost the government 64.6 billion reais ($15.95 billion) in lost revenue until 2019, according to official data.

Lawmakers also maintained the veto of a bill to allow workers to retire earlier with full pension benefits. The proposed formula to calculate the retirement age of workers would have raised public expenditure by an extra 1.1 trillion reais until 2050, government data showed.

After a long session extending beyond the midnight hour, Congress postponed the vote on two vetoes of bills that threatened to raise public expenditure in coming years: a hefty wage hike for judiciary employees and a raise in benefit payments for retirees. Congress has not yet set a date for voting on the remaining vetoes.

Uncertainty over the vetoes dragged the Brazilian real to its weakest level on record on Tuesday, as it traded above 4 per U.S dollar. The real has shed nearly 35 percent of its value against the U.S. dollar so far this year as the economic and political crises have deepened.

Repeated clashes between Rousseff and her wide-ranging alliance in Congress have exacerbated an economic slowdown and led Standard amp; Poor’s to strip Brazil of its investment-grade rating earlier this month.

Rousseff, a leftist who was re-elected in October, is pushing for more tax hikes and spending cuts to plug a widening fiscal gap and avert downgrades from other ratings agencies. If two rating agencies cut Brazil’s debt grade to junk it could spark a capital exodus from an economy that until recently was a Wall Street favorite.

Rousseff’s victory in maintaining those crucial vetoes does not mean that lawmakers will support her fiscal adjustment plan, analysts say.