Brazil economy in slowdown ahead of World Cup 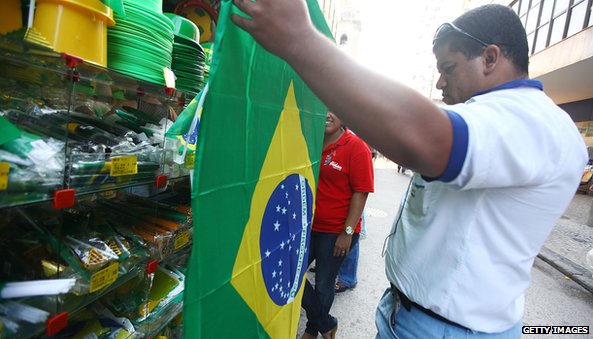 The Brazilian Institute of Geography and Statistics also revised down economic growth in the last three months of 2013, to 0.4%.

The sluggish growth figures come just before the start of the World Cup and presidential elections in October.

President Dilma Rousseff, who is seeking re-election, has said the football event will spur growth.

But high inflation and low business investment have put a damper on the expected lift from government investment in projects leading up to the sporting event.

This has spurred protests from Brazilians angry over the expense of the World Cup and the lack of trickle-down growth.

Business investment fell 2.1% in the first three months of 2014, the biggest decline in two years.

“I couldn’t find anything positive at all in the [data],” said Bruno Rovai at Barclays.

Brazil, which is Latin America’s biggest economy and the world’s seventh largest, has suffered from stubbornly high inflation, which remains at 6%, above the central bank’s target.

On Wednesday, the central bank kept its key interest rate at 11% in an effort to combat rising prices.