Banking Woes Not Over For Brazil ETFs 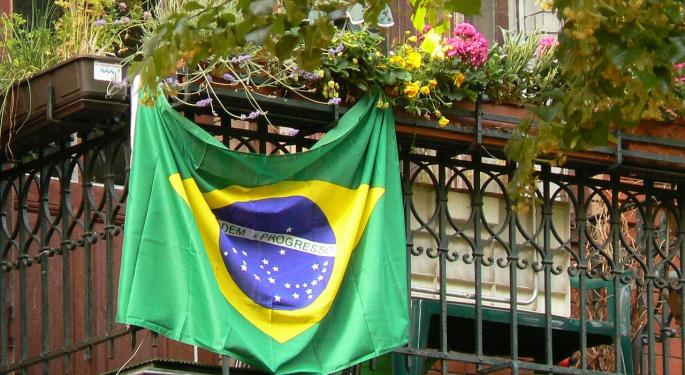 The iShares MSCI Brazil Index (ETF) EWZ 0.64% is higher by nearly 36 percent this year, making it one of the best performing emerging markets single-country exchange-traded funds. EWZ’s performance and those of Brazilian stocks is undoubtedly impressive in the face of steep economic and political challenges.

Brazil’s economic problems (the country is mired in recession), run deep, but this year, global investors have focused more on regime that resulted in the departure of former President Dilma Rousseff. However, that does not cure what ails Latin America’s largest economy.

Among those problems are high inflation that makes it difficult for Brazil’s central bank to lower interest rates, which, at 14.25 percent, are among the highest in the world. The central bank there is hoping for inflation of 6.5 percent, but recent data indicate inflation in Brazil is nearly 300 basis points higher than that.

Add to that, banking issues are starting to creep up again. As Benzinga reported late last year, a problem for EWZ is weakness in Brazilian bank stocks, which is particularly problematic when considering the sector’s issues against the backdrop of some of the developing world’s highest interest rates. EWZ’s financial services weight is about 35 percent, or more than 1,500 basis points larger than the ETF’s second-largest sector allocation, consumer staples.

The Issue Of Public Pensions

Challenges for Brazilian stem for what is becoming a familiar issue from Illinois to Greece: Public pensions. Cash-strapped Brazilian states are now delaying doling out benefits to pensioners, potentially crimping banks that previously rushed to lend to this segment of the Brazilian population.

So dire is the situation in some areas of Brazil that states are delaying payments to pensioners and paying current public workers in installments. Those forced to dip into personal savings present another risk for Brazil’s big banks, such as those in EWZ’s lineup.

“Payment delays could lead to a spike in impairments in payroll discount loan portfolios. Up to 30 percent of a public sector employee’s salary can be used to service payroll discount loans and state employees often bank with state-owned banks, adding to concentration risk. As employees face a cash flow squeeze due to delayed state payments, they are more likely either to look for more expensive alternative loans or dip into their savings deposits, which could add to funding pressures at the state-owned banks,” added Fitch.