“By the end of January, India has exported more than 100,000 tonnes and export demand is still there,” said Yogesh Mehta, director, Indian Spice and Foodstuff Exporters Association (ISFEA). This year, demand has increased from across the world, as production in Turkey and Syria has been low. Also, the Indian crop is cheaper. Mehta said in 2013-14 production would be 360,000 tonnes against 302,500 tonnes in 2012-13.

A trader at the Unjha market in north Gujarat’s Mehsana district said, “The European Union (EU) and the US are buying from India. As a result, there is a rise in exports.” In two weeks, the new crop has starting arriving and it is expected the arrivals will increase gradually. Vice-Chairman Nimish Vora said, “Prices may decline further.” 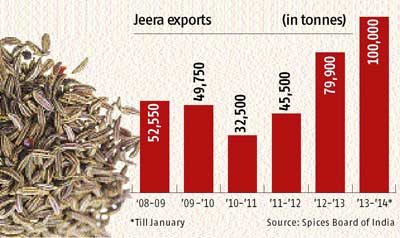