BRAZIL – Agricultural land in Brazil expanded by 33 million hectares between 1990 and 2010 (roughly the size of Poland) and now the challenge is to drive for productivity and sustainability.

However, this comes at a time when much of the world is going through economic strife, says a new report from the Organisation for Economic Cooperation and Development (OECD).

Major economies of the world, once booming and supporting Brazilian farm expansion, have slowed and farmers elsewhere are offering greater competition.

With external demand waning, Brazil’s farmers must innovate and compete on costs, while addressing key sustainability issues the world’s farmers are all tackling.

The report’s message is that Brazil has spent recent years making more land, but now has to make more from the land it farms.

In this summer’s report Innovation, Agricultural Productivity and Sustainability in Brazil, the OECD said air and water pollution issues will be more pressing for agricultural policy, adding to well-known deforestation considerations.

To progress, the report suggests Brazil orients policy to productivity and sustainability, listing research organisation EMBRAPA (Brazilian Corporation for Agricultural Research) as a “major contributor” to research in tropical agriculture.

Expansion of pasture land expansion in the 1990s and arable land since 2000 has pressured the Amazonian and cerrado savannah, which combined contain the largest portion of the world’s terrestrial biodiversity. 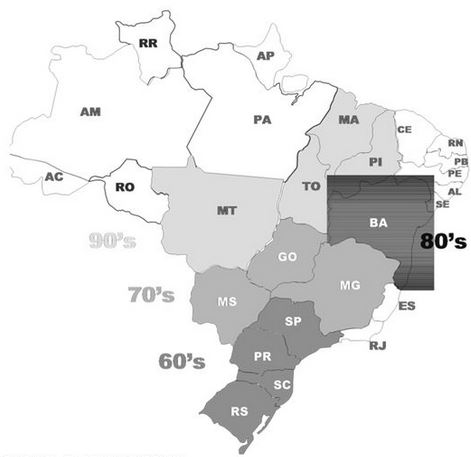 Image courtesy of the OECD

Brazilian Soybean acres increased by 50 per cent between 2001 and the end of the 2003/4 season, “soaring” by 9 million hectares. The report puts the growth down to new land management technologies and policy stimulus.

In response to deforestation, governments tightened land-use rules and came down harder on illegal activity, although calculations show half a million square kilometres of undeveloped cerrado land with agricultural potential remain.

The OECD report says that primary agriculture features in a bigger way in Brazil than in most advanced economies, contributing five per cent to national gross domestic product (GDP).

Agriculture employs 17 per cent of the national workforce, although the contribution to GDP is lower than in countries like India and China.

Recent Brazilian agricultural growth, the report says, has been driven largely by productivity increases, which helped the country to be the world’s seventh largest economy in 2012.

Fertiliser and chemical use is intensifying, although a 2006 farm census showed almost 70 per cent of farms used no fertiliser at all during the year.

Main crop yields have doubled or trebled since the 1970s, with strong yield improvements in the 1990s. During this time tractors on farms trebled in number and doubled in value.

The report proposes a blend of economic stability and trust in institutions, market incentives for investment, improved services and targeted incentives to provide productivity and sustainability.

This is to include improved infrastructure, education, a more skilled labour force and innovation, which should combine, the report says, with a more business friendly tax and regulations system.