The 17 new Sustainable Development Goals, also known as the Global Goals, aim to end poverty, hunger and inequality, take action on climate change and the environment, improve access to health and education, build strong institutions and partnerships, and more.

“Ours is the last generation which can head off the worst effects of climate change and the first generation with the wealth and knowledge to eradicate poverty. For this, fearless leadership from us all is needed,” said Helen Clark.  “If the global community collectively is prepared to step up to the challenge of achieving the Sustainable Development Goals, then there’s a chance of achieving sustainable development – and with it better prospects for people and our planet.”

With 50 years of experience supporting countries in their development, UNDP will be the first port of call for support for many governments as they implement the SDGs. 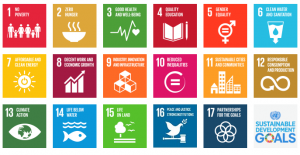 The SDGs build on the Millennium Development Goals (MDGs), eight anti-poverty targets that the world committed to achieving by 2015. Since the MDGs were adopted in 2000, enormous progress has been made, but more needs to be done.

The SDGs have a more ambitious agenda, seeking to eliminate rather than reduce poverty, and include more demanding targets on health, education and gender equality. They are universal, applying to all countries and all people. The agenda also includes issues that were not in the MDGs such as climate change, sustainable consumption, innovation and the importance of peace and justice for all.

To raise awareness around the newly adopted SDGs, UNDP is holding Social Good Summitsin more than 100 countries, running parallel with the Sustainable Development Summit. UNDP will use the Social Good Summit’s platform and audience to help governments and partners around the world launch the SDGs and help make the new Global Goals a household name everywhere.

UNDP’s is also partnering with Project Everyone. Initiated by Richard Curtis, filmmaker and founder of Comic Relief, Project Everyone has a simple but mighty aim: to share the global goals with 7 billion people in 7 days.

As the lead UN agency mandated to eradicate poverty, UNDP has had a central role in shaping the new global development agenda. UNDP helped governments get together with civil society, the private sector and with people around the world to decide what the world’s priorities were for the SDGs and make the process to determine the 2030 agenda open, transparent and global.

Since 2012, UNDP has led the global conversation on what to include on the agenda on behalf of the UN Development Group. That conversation sought the views and contributions of people from all over the world, including more than 8 million people through the MY World survey and World We Want 2015 platform.

“UNDP are committed to a strong global partnership that is key to the realization of the new agenda and the Sustainable Development Goals,” Clark said.