South Africa is facing an economic crisis and hard choices need to be made to rescue the country’s economy, Democratic Alliance leader Mmusi Maimane said. 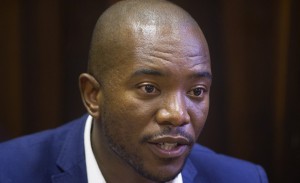 The DA leader was reacting to the latest unemployment and economic growth figures which were released by Statistics South Africa on Tuesday.

Maimane said that he had tabled an urgent request for a debate in Parliament “to urgently discuss how we can defuse the ticking time-bomb of continued inequality and unemployment.”

“The latest economic indicators released yesterday by StatsSA show that South Africa is facing an economic crisis. Unemployment is rising and economic growth is dangerously slow,” Maimane said in a statement on his party’s website.

“The figures released show that since President Jacob Zuma came to office, unemployment has skyrocketed from 31.7% in 2009, to 36.1% in 2015. This means that 2 million more South Africans are without work today than 6 years ago.

“A job does not only provide a means of support, but also provides individuals with a sense of independence and dignity. Young people are being deprived of the opportunity to pursue a life they value as a result of the weak economy and skills-shortages caused by the failing education system.

“In order to build a more equal and inclusive society, we need to fix the problems that constrain economic growth so that we can create jobs.

Maimane said that the ruling party’s policy uncertainty, the country’s electricity crisis, the infrastructure failures and corruption were killing the economy.

“Hard choices need to be made to rescue our economy and unlock the potential of the South African people,” Maimane said.

“As long as millions of us are deprived of opportunities and the dignity of employment, the DA will continue to fight for policies that will create real jobs that give all South Africans a chance to succeed in life.”